Excursions within 1 hour by car

Rogoznica is a small fishing village with Frapa Marina port and is considered to be the most beautiful one on the Croatian shore. It is situated on a peninsula which originally was an island called Kopara. It was not connected with the mainland until the 19th century. In close proximity to the Frapa Marina, you can see an interesting natural phenomenon – Lake Dragon Eye (Zmajevo oko), which has a connection with the sea and, therefore, salt water.

Lake of characteristic blue-green color was formed during the last Ice Age, about ten thousand years ago, when the sea rose about 100 meters and broke into the basin that had formed before the lake. It occupies the area of only 5,300 square meters and is 15 meters deep.

Trogir is one of the most visited cities in Dalmatia. Its historical center is listed by UNESCO as a unique example of a Roman island town. The largest magnet is the cathedral with the famous Lion Portal.

Split is the main economic and cultural center of central Dalmatia and is one of the sunniest places in the Adriatic region. There is an extraordinary number of monuments in Split. Ancie Diocletian’s Palace has been part of the UNESCO World Heritage since 1979.

Krka is a national park in Croatia proclaimed in 1985 and named after the river Krka. The park is located in the central part of Dalmatia, in the Sibenik-Knin County near the district town of Šibenik. Krka National Park is famous for its numerous waterfalls and colorful ponds. The area of the National Park is 109 square kilometers. Section at the Skradinski buk cascades is often said to be the most beautiful one. Entrance to this national park is paid.

Plitvice Lakes (Plitvička jezera in Croatian) are the most famous national park in the Licko-Senj County of Croatia. They are located on the upper course of Korana river between the limestone mountain massifs of Velká Kapela, Malá Kapela, and Pleševica between the towns of Karlovac and Zadar near the border with Bosnia and Herzegovina. The karst lakes are terraced and connected by water courses. There are 140 waterfalls, 20 caves, and springs. The area of the park is 29,482 hectares, of which 200 hectares are covered by lakes. Large areas of the park are covered with beech, fir, spruce, and yew forests. Bears, foxes, roes and wild boars live here.

Dubrovnik is an attractive south-Dalmatian city, whose historic core is surrounded by massive fortifications. Sunny climate, wonderful beaches and a pleasant shade of orange trees turn Dubrovnik into one of the most beautiful places in the Mediterranean, so it is also called the “pearl of the Adriatic”. The historic city center is surrounded by vast city walls which comprise 15 towers and several forts. This exceptional city fortification is one of the most valuable monumental complexes in the south-eastern Europe and has been part of the UNESCO World Heritage since 1979. Old Dubrovnik is a strict pedestrian zone, you can go down the Stradun promenade, or across the wide ramparts, offering a perfect view of both the city and the open sea.

EU citizens can enter the territory of Bosnia and Herzegovina with the passport but also with their national ID card. More details about traveling to BiH is available from your Foreign Office. 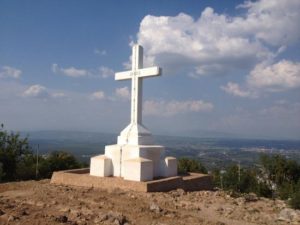 This poor mountain village is famous for the fact that, on June 24, 1981, Virgin Mary appeared in front of six children and later also in front of many pilgrims. Although the Catholic Church has not officially recognized the apparitions, pilgrimages to the village take place regularly. The actual place of the apparition of the Virgin Mary is at the Revelation Hill near the village. The main message of the Virgin Mary is: “Peace, peace, nothing but peace. People need to reconcile with God and with each other. It is necessary to believe, to pray and to fast, to regret one’s failures and to turn to God.”

The city’s name is supposedly derived from its most famous landmark Stari most bridge, which is the exact replica of the original bridge that stood for 400 years before it was destroyed in 1993 by the Croats. The original bridge was the work of Hajrudin, the disciple of the famous Ottoman architect Sinan. Its only arch is 28.7 meters wide and reaches 21 meters above water level (in summer). Halebij and Tara towers at the edges of the bridge were always the seat of its guardians and ammunition was stored there in Turkish times. Jumping into the water from the bridge takes place every summer. The city population after the war in 1990s and after the post-war changes is estimated to be about 70,000 inhabitants (130,000 including the entire agglomeration). The vast majority of the population today consists of Bosnians and Croats. Serbs, who had 19% share in Mostar before the war, are a negligible minority today.

(the pull-down menu is placed under the “English” link in the main language menu in the header of the page).